Raspberry Pis these days are powerful computers that can run a lot of tasks at home with very efficient electricity usage. In this post I’m going to show how to use a Raspberry Pi 4 8GB as a Plex server and serve your own media files in your own network. In this project I used an Argon ONE M.2 Case for Raspberry Pi 4 as it allowed me to use an SSD drive with the Pi which is a lot faster than a microSD card.

Argon ONE comes with a comprehensive used guide and take about 10 minutes to put everything together so it’s not too different than using a regular Pi case. The added benefits are:

The final build looks like this with a 5-bay YottaMaster enclosure attached to it: After the installation open http://localhost:32400/web and you’re ready to go!

I already had an account so I just logged in with my credentials. This automatically adds the new server to your account so you can see the libraries in other server instances in your account as well.

Because I attached a 5-bay hard drive enclosure to the Pi, I wanted to use it for a general file server as well. This also helps if your media files are located somewhere else on the network and you want to copy them over the network if you’re not able to attach the source drive directly to the Plex Server Pi.

To create the file server I followed this guide to install Samba on my Pi: Samba: Set up a Raspberry Pi as a File Server for your local network

One issue I had when I tried to add some test folders was that Plex wasn’t able to list the folders in a selected drive. I found the solution here: Plex Media Server cannot see sub folders.. Permissions issue?

Basically added the permissions to the folders in the path as shown in the accepted answer:

I’m not going to go into much detail on the client side as there are a vast number of ways to consume content from a Plex Server. In my case, I’m using a Kodi on another Raspberry Pi and as soon as I added the new Plex Server to my Plex account I was able to view the content on my client Kodi Pi.

Overall it was quite straightforward as the server package came ready to install. The only issue I had was to figure out the folder permission issue and after that’s been resolved I was able to enjoy a brand new Plex Server instance in my own network. Hope this helps if you’re after similar results.

I have a Dymo LabelWriter 450 for years and I love using it. Especially it worked a miracle recently when I organised all ny shelves and bagged and labelled everything. To have the ability of keeping the printer online all the time and print easily I decided to plug it in a Raspberry Pi and share over the network. The steps below explain how it can be done easily:

Step 01: Plug in the printer to the Pi via USB

Simply plug it in and power it on. 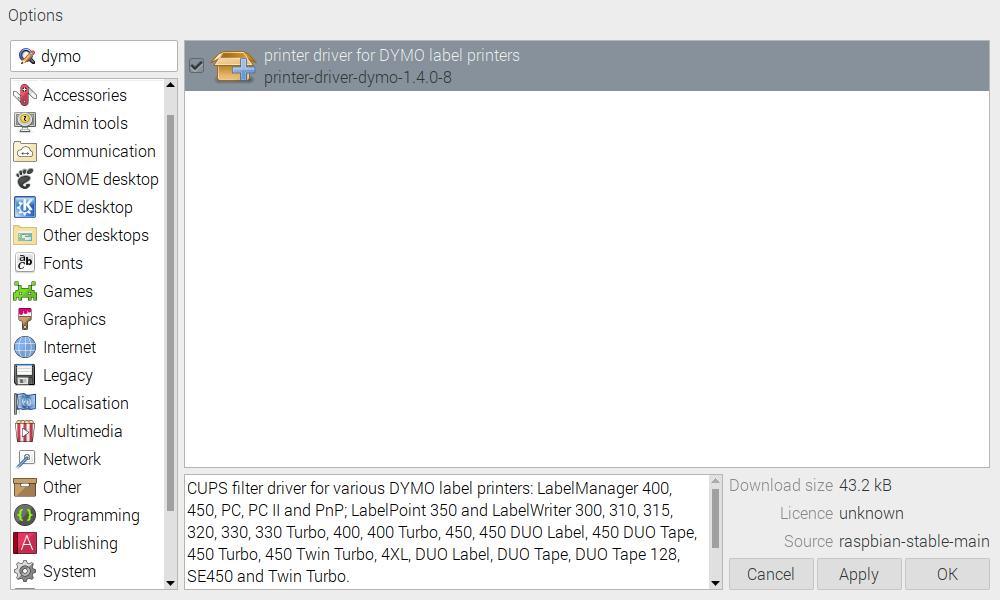 For me, this method did work on one machine and did not work on another one. So for the other machine I used Option 2

I used a Mac for this but should be similar on Windows. Now that printer is recognized on the client machine, just design your labels and print using DYMO Label app. Migrating an EC2 Instance to a Different AWS Account

Recently I needed to migrate an EC2 instance to a different AWS account. There’s no built-in functionality to handle this. The solution is creating an AMI from the instance and sharing it with the target account. I scripted my solution with Powershell and AWS Tools for Powershell as below.

I put all the variables in a Powershell script file which I include in the following steps. To use the scripts you need to provide the values first. Hopefully the variable names are self-explanatory:

First step to migrate EC2 instance is to create an AMi from the instance.

This operation takes a few minutes. The image has to become available before we can proceed to the next step.

Now the image is ready we have to share it with the target account. The script below shares the AMI and allows new volumes created from this AMI.

We have access to this image but we want to have our own copy which we accomplish with the script below:

In my experience the whole copying process took about 5 minutes.

Now that we have our own copy of the AMI we can launch instances as we please. Job (almost) done!

Final step is to clean up after ourselves. Since this AMI was created to migrate to the new account only I assume we won’t need it anymore in the source account. The following script deregisters the AMI and deletes all the associated snapshots.